Moooorning, guys!
How was your week? Mine went great! My bf had a birthday and I got lots of things done!

First, the programming of chapter 3 is off to a good start ^.^

The new character and ally silhouettes that will make appearance in chapter 3 are... *dun dunnn...* remember him? 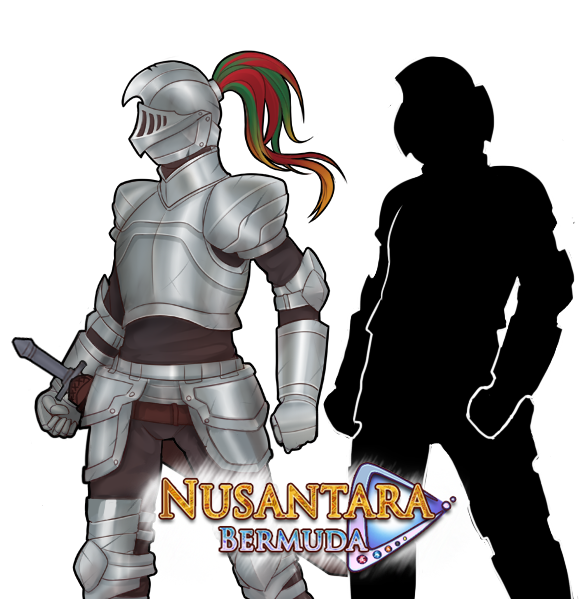 If you remember, the knight with colorful plumes and in full body armor was in one of my sneak peeks ;)
His name is Sir Marco, and yes, he's a lefty. His alliance is with Kaiden, along with many soldiers below him.

The soldiers will have many variations later; like, lancer, archer, and swordsman--including their idle & attacking pose.

As for the enemy silhouettes? They're a secret ;) don't wanna have too much spoilers, right?

In addition to all above, I also ocassionally looked up new sound effects & BGMs--I'm really picky about those, so... the search will probably continue until Bermuda is finished & with lots of revisions later ><

In any case, cheers for chapter 3! Let's continue to work hard!
xoxo,

I also appreciate your updates too. Is kind of frustrating not knowing if the creator or creators will finish the an interesting creation. Even though there are kinks to work out your VN game already seems to peak my curiosity and others. I hope u or ur team(if it's more than two people) dont feel rushed or pressured by what I say because beautiful and amazing work of art and an amazing story takes time to develop. Thank u for the update and for a new VN game to look forward to.

Yes, I agree that Bermuda has a lot of kinks to work out--I sometimes wonder where the heck did I get this idea of throwing a bunch of misfits people together and making an otome out of it ^^; this fantasy story is the kind that takes time to be understood so I was like; 'will people like my story? is it interesting enough until they reach the climax?'

Bermuda might be my longest story ever. Double or even triple the word count of Winged Ones, so actually... I'm the one who should thank YOU for willing to give my baby a try! QuQ *hugg

Just wanted to say I appreciate your constant updates. It's rare nowadays when a game dev doesn't keep their fans in the dark. Even if things slow down in the future or would happen to, it's nice to have someone who cares enough to update, so keep being you! Thank you for your hard work!

You're welcome, narutocharsrcool! The updates are the least I could do since I'm quite slow and horrendous at predicting schedules ^^;

*I assume all gamedev have this problem? or is it just me? *cough

So thank YOU for your patience and for the warm support! I wouldn't be here without you guys, so I'm really glad to have people ocassionally visiting me and dropping comments ^.^- or maybe stalk me behind the bushes/shadows? I provide free cyber cookies and hugs every week lol

With all the progress you are making I am getting more and more hyped with each update!!! Remember to take breaks and spend time for yourself and family. :)

As always, thanks a lot for coming, SkyDragon3564! *hugg

You too! Take care of your health and drink lots of water! ^///^

I did it! I replayed Rama's route!! And it was so good T^T I'm really grateful that I forgot most of his story, so I could play it like it was my first time.

I really like how deep his character is. He can be so scary, sweet, funny, and cute at the same time and AAAA!! I was reminded once again what makes this one of my fave VN of all time! Reksa's route is one thing (i still luv u, boo), but Rama's is so solid! It was really the true end of Winged Ones! i rly luv him nao >.<

I'm having a hard time letting go Mitra, Rama, and Reksa (again)... but let's move on!! I should stop talking about Winged Ones when Bermuda is what's going on right now! Show me what you got with Bermuda, SweetChiel! You got more progress to go!

P.S. I don't know why but Sir Marco is cute. And I can't even see his face.

Aww, glad to hear you replayed Rama's route and loving it! And it's fine to talk about Winged Ones here--actually, please do! I'm always happy to hear people are still playing my 1st baby ^///^

Bermuda is still the same old 'slowly but surely' but I'll do my best to program the script faster! >:'D

Oooh, I hope your bf had a great birthday! Don't burn yourself out working to hard, remember to take your time and take breaks, stay healthy ^-^

He kinda expected the surprise lol but yup, we spent some sweet time together ~ >\\\< and thank you for worrying! *hugg I'm healthy and kicking like a horse!