Morning, guys! How did your week go?
Mine didn't quite... go as planned... QAQ

Last week, I was hoping to finish the cameo scene in one go, but...

16 pages in and just when it was time for me to program in Rama, Mitra, and Reksa, the heat got into my head and I just... stopped.

I mean, the weather is getting ridiculously hot here and it's not even the dry season! Q_Q

I also just remembered that Winged Ones' sprites didn't blink their eyes, so I thought; 'should I animate their eyes as well? But it might be good not to so the audience can differentiate the main characters from the cameo characters...' and so on. I might be overthinking again x_x;

The heat didn't beat me just like that, ladies and gentlemen!

Because I didn't have the mood to program, I decided to have a change of pace and make sketches of Chapter 4 part 1's CGs! And I finished all of them; 6 sketches are finished, which is a new personal record! 3 for Guntur and 3 for Kahlil >:D

Here's a sneak peek from a keyhole for you:

I'm very satisfied with most of them :'3
I mean, these sketches might change in the future and I haven't color them or anything, but this counts as a big progress, right?

However, 1 of Guntur's CGs might not make it. The pose turned out strange and... even slightly NSFW--which I didn't plan to do at all! OTL

Well... on a positive note, I'll post a full preview of the sneak peek above for my $5 tier patrons today ^.^- and to welcome a couple of new $10 tier patrons... I'll post a gif, containing the process of that particular CG sketch that might didn't make it and explain why... *I'm so embarassed about this one--forgive me and my perverted mind!*

Well then... that's it for today? I hope you guys are not angry with me because of the slow programming :'D here's where I left: 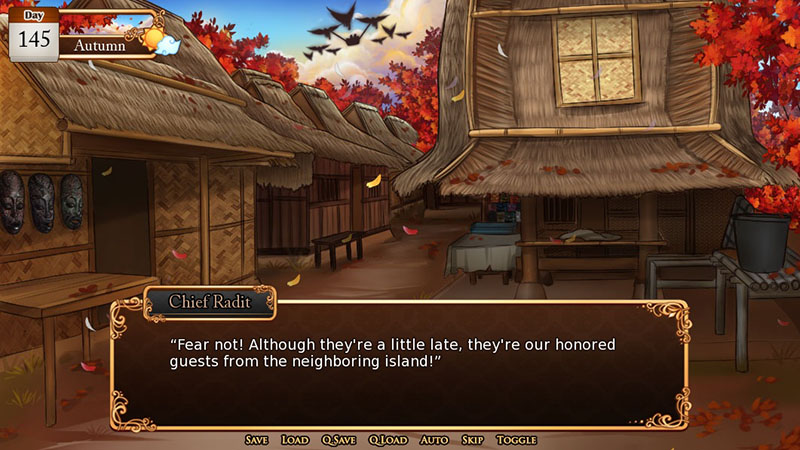 The cameo scene have just started, and--oh! Now you know the name of the Autumn Village's Chief ^.^)/ And if you noticed, this screenshot has a 'flower shower', different from the 'falling autumn leaves' effect I've shown you once. Later, you'll get to see many more effects in the game!

Thank you for reading and see you guys next week!
xoxo,

- Guntur likes Spring the most because there are plenty of food to go around!

- Like Maya, Kahlil likes Autumn the most because there are sweet potatoes and beautiful sceneries to enjoy it with!

- Arya didn't like any of the four seasons. He'd rather have only a rainy season and a dry season.

Your update logs are so much fun to read, especially the fun facts!

Ironically, where I live, it just keeps on raining. Make sure to drink a lot of water!

Thanks again for your update. It is always nice to read through and see the ongoing process. I'm already looking forward to the finished game! ;) Do you already have a release date? I thought I saw it somewhere but I don't remember where.

Congratulations on completing the sketches for Chapter 4.1 for Guntur and Kahlil. The one that I saw is great. I totally like your drawing style! :) And yes, I was wondering where the sketches for Arya are! (My favorite of the three.;)) So thanks for the info. I'm looking forward to the next update, until then stay healthy!

Sadly, I did have a planned release date but we have far surpassed it x_x; I'm bad at predicting dates--or maybe I underestimated the workload OTL-- but please be assured 'coz I'm not planning to stop until Bermuda is completed! >:D

I'm also very happy to hear you like my drawing style~ Arya is quite a tough nut to crack but his route is really rewarding once you arrived at chapter 4 part 2 so look forward to it! ^///^

You too, take care and stay healthy! Don't overexert yourself, especially in this times of COVID ><;

Stay hydrated during the heat! We can be patient and it will all be worth it in the end. Great work on the CG progress too. I know that getting through six sketches would be a new record for myself. Nicely done. :D

As always, thank you for dropping by and writing me your support, MermaidVictory! QuQ *huggs
I really need that. I've been sweating buckets--and thank goodness! It rains today!