Hey, guys! What's up?
I hope your PC/laptop is doing fine and not causing any trouble like mine lately x'D

Yesterday, my macOS is lagging so bad, I considered going to the service store again. However, I decided not to because I discovered that as long as I don't open Safari, things are not as laggy and still tolerable. The strange thing is my Windows (which is also installed in my macbook), is doing fine so what's with my macOS Sierra? :S all I want is to work on programming with peace *sigh*

Let's put it aside for now and let me tell you what I did last week:

- 31 pages programmed in! Christmas is coming and before vacation season, I'll do my best to do more programming to cover my weekly quota~ I could've done 40 pages, but the lag got in my way QuQ I'm using Firefox now instead of Safari so I hope everything is okay now. I don't want to go outside if not really necessary (self quarantine. my town isn't looking so good).

Last but not least, I've been trying to reconnect with my semi-realism painting style and I think I improved!
It's been a long time since I do any illustration that's not involving my visual novel project :'D I also want to reward my patrons on my Patreon with more step by step GIF so... here you are! 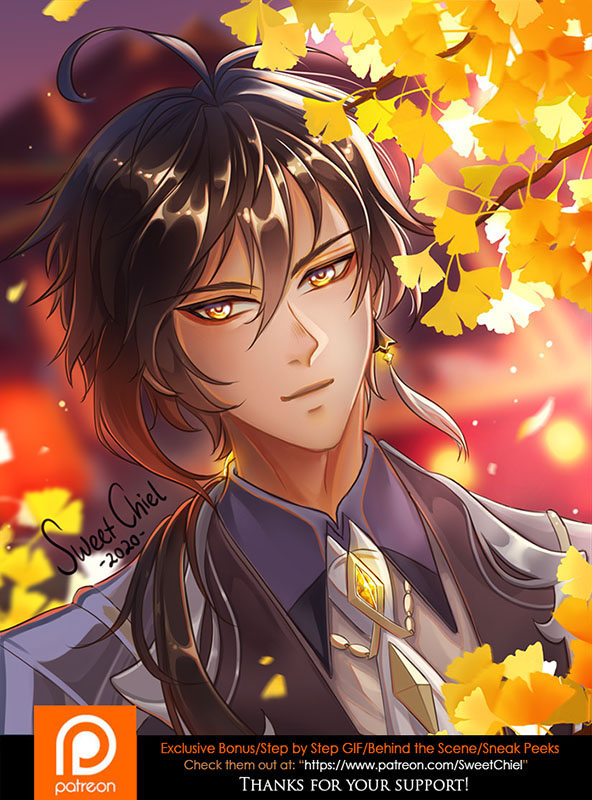 Anyone know this character? It's Zhongli from Genshin Impact!
It's a new mobile game that have caught my attention. Their characters and environment designs mesmerized me at first sight :'3
Btw, the blurry background is actually from an ingame screenshot x'D

This week, my $10 patrons will gain early access to step by step GIF, HD raw .psd file, and the ginko leaves brush that I used for this piece! (Credits to the original brush maker, Fooblued. His name will be in the brush title~)

That's it for now and see you guys next week!
Here's hoping my laptop won't get into any trouble anymore QuQ
xoxo,

Q&A session part 22! If you have any questions for the bachelors, type away!

1. What is your preferred mode of transportation?

Guntur: "Motorbike. With a helm on, I won't be easily recognized."

Kahlil: "By bus or walking is fine with me--oh! I've always wanted to try riding a tandem bicycle though! You know, the one with double seat?"

Kahlil: "Who else? Do you also want to try, Arya?"

2. What would you do if your laptop/PC is lagging or crashed for no reason?

Kahlil: "I'll clean it up and try to tinker/repair it myself."

Genshin Impact is also available on ps4,NS,IOS and Windows. So it isn't just a mobile game

You're right, princessbarb21!
I forgot to mention it's a crossplatform game x'D

OH MAH GOD ! Your semi-realism art looks so beautiful. I really hope your pc is okay now. It once happened to me and it sucked :(

Hi, tis i! It's okay now, still lagging but tolerable 😂 I just hope my laptop will last until next year--with the condition of my city , I'm reluctant to leave the house if not really necessary

And thanks! I'm glad to hear you like my semi-realistic style >///<