Good morning and Happy late Halloween!
Don't forget to brush your teeth after eating all the candies x'D

Things are still busy over here but it's a lot better than last week!
I made a lot of progress in the department of polishing and programming:

Last but not least, to show my appreciation, I manually typed in your names and arranged them in alphabetical order!
Both for IndieGoGo backers and Patreon backers! 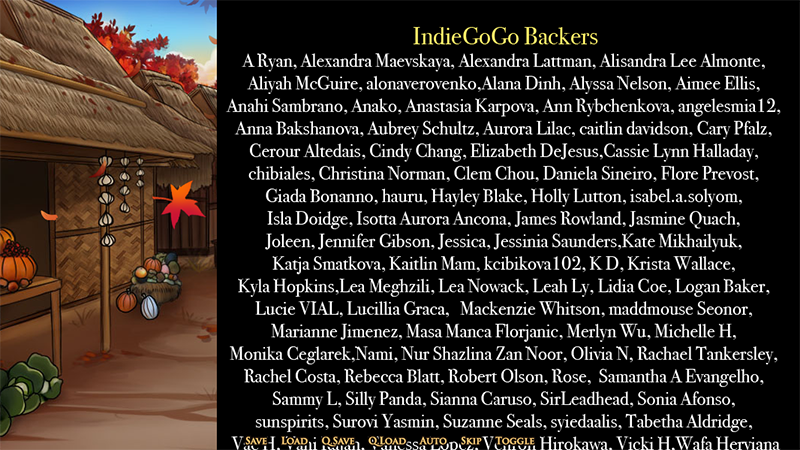 I can't believe there's so much of you, more than enough to fill a screen <3

I still have to program in the Epilogue sprites, but if things go smoothly, the beta testing should open somewhere mid-November, so stay tuned!

Oh, one more thing!
This is a mild spoiler, but I think I should give you a head's up that Kahlil doesn't have a kissing CG... because he's not old enough *runs away
Jokes aside, it's really because he's too innocent x'D imagine them acting all shy and sweet like teenagers in love, but just the concept of kissing is enough to make them blush all the way up to their ears and deny it, saying it's not the right time yet lol. Ah, young love.

With that said, here's hoping you guys had a great week!
Don't skip your meals and rest plenty, okay? I'll see you again next week ^///^
xoxo,

Q&A session part 57! If you have something to ask the bachelors! Please don't hesitate and type away! ^.^)/

1. Hi guys! What perfume do you use? (or, if none, Maya - what kind of scent reminds you about each of them? Or what scents do you recommend for each of them? Ex: Sandalwood, Vanilla, Orange, Lemon, etc)-- by: Yukina4evr

Maya: *blush* "As far as I know, they never used perfume. But if you ask me what scent the reminds me..."

Maya: "...This is too embarassing! Won't I be called a pervert for knowing what they smell like?!"

*After some persuasion and lots of thinking, Maya finally spoke while covering her face*

Maya: "Kahlil smells sweet, depending on what candies he's eating that day. He can smell like vanilla, orange, strawberries... you get the picture..."

*As Maya's voice became smaller and smaller, we suddenly see something red trickling down...*

*...Maya was having a nosebleed and after realizing that, she refused to say anymore and ran away."

Support me on:
Patreon:  https://www.patreon.com/SweetChiel
or buy me a Ko-Fi: https://ko-fi.com/sweetchiel

Happy late All Hallows Eve/Halloween~ (˼●̙̂ ̟ ̟̎ ̟ ̘●̂˻) *skeleton* Yes, very important to brush one's own teeth after eating lots of candy (got cavities from childhood that are still present, so can only have less candy ^^;) (´；ω；`)

Looking forward to read all different forms of love, even Kahlil's ♡´･ᴗ･`♡

Aw, my bad Maya for putting you on the spot like that ^^; But thank you for sharing your thoughts~ I've notice how some romance stories would actually have the MC describe the smell of their LI (& I think vice versa? Or something along those lines) & was curious for this story, so I couldn't resist asking (*≧▽≦)ﾉｼ))

Forgive me, but when I saw "spice," my mind went to "Old Spice" (totally love btw hehe) (ᗒᗜᗕ)՛̵̖ And I feel it's fitting for Guntur to associate him with musk & spice. For musk, I had to look it up to understand it more & will pause from there (cause I think I can recall its smell via olfactory memory, but to describe it was another story lol) The spice part makes me think of the saying "spice things up" & will leave it at that  ;)

I like Arya's scent, and like Yanonako, was curious about the smell of snow（‐＾▽＾‐) Unsure how true this is, but I read somewhere how the smell of mint can boost the brain & improve problem solving (Credit: Mint Scent Boosts the Brain, Improves Problem Solving and Memory (naturalsociety.com)). For pine scent, I read in the following link that it lowers stress (Credit: 11 Scents That Can Do Wonders For Your Well-Being | HuffPost Life). To me, I do feel relax when I smell both mint & pine (my guess is Arya likes the outdoors for the pine & gives the relax, focus aura when in work mode for mint), whereas with Kahlil's, it makes me feel jolly & with Guntur - (now understands Maya's reaction lol) (⁄ ⁄•⁄ω⁄•⁄ ⁄)⁄

For snow, I saw this link: The Science-Backed Reason You Can “Smell” Snow | Reader's Digest (rd.com) Again unsure how true it is (taking psych classes & always reminded to trust peer reviews than second-hand sources for the most part), but find it interesting nevertheless. (ノ^∇^) I like how Yanonako describes the smell of snow as "cool & fresh." I was thinking cold to match Arya's personality （＞ｙ＜）

Lol, I'm glad you enjoyed the Q&A session!
Because of this, I'm considering to buy an air humidifier/diffuser--I want to try making my room smell nice & I think it'll be interesting to experiment with various scent x'D

Psst, I also didn't know about musk until I watched a movie about a Perfumer serial killer (I forgot the title, but it's set in Medieval and prof. Snape played in it). I became interested and now I know perfumes have 3 notes O-O

As for how snow smells like... have you tried pushing your head into the upper refrigerator/cooling box that contains ice cubes and smell them? I... I tried and I think I can smell them rofl

That aside, your question is noted! You always came up with an interesting one x'D

Thanks again for visiting and for showing your love and support <3
See you around!
xoxo,

Hi, SweetChiel! ⌒°(❛ᴗ❛)°⌒
A mix of a blessing & challenging week but all good thank you~ o(*>ω<*)o Likewise~ Right?! Psyche up for holidays~ ヾ(≧∇≦*)ゝ

I think I've used air humidifiers when I was super young since I have asthma & also for when I have colds/flu. Haha I can totally imagine you experimenting different scents x'D Sounds like a plan~
ヾ(･ω･｡)ｼ If possible, love to hear updates if you ever do end up purchasing one (or an item that carries a scent). Lately, I bought myself a $5 fan from a local garden museum with a sandalwood scent. It not only freshens up my room but also relaxes me from high stress.

:: ˓(ᑊᘩᑊ⁎) :: Tried to Google the movie name but all I came up with was "Perfume: The Story of a Murderer" & Prof. Snape (my best guess) is actor Alan Rickman. I also found that it has its own novel which may have been inspired by the "Tallow Man," Manuel Romasanta (Credit: Perfume (novel) - Wikipedia) Kindly disregard if I have wrong title, but I never knew of this & it totally was a unique finding lol ( ꒪Д꒪)ノAnd wow~ (✿☉｡☉) I looked up perfumes + three notes & that's super cool~ I kind of like to go to a perfume workshop session to learn how to make my own perfume o(≧∇≦o) Thank you for the fun fact~ (/^▽^)/

Good that it is not so busy as it was in the last week.
I'm sure you were upset over the elderly. I was it for you when I read your update, but preferred to keep quiet, otherwise the comment would probably have become a bit rude. (Because I can not understand this interference due to the tradition.) But I understand it totally when someone else takes off your schedule. I do not like that absolutely. And well ... Why do all forget the virus? Really bad. * Sigh *

But now back to today's update. :)
You have come really ahead. Thanks for your work. ;)
And we come closer to the "goal". I am so looking forward to the beta testing. ;)

Oh and I love the answers to the great question of "Yukina4evr".
Well ... you know me, especially the answer to Arya. XD (Mint, Pine and Snow.)
How does snow smell? Cool and fresh .... XD I'm just trying to "imagine", but I should probably stop! XD

Hi, Yanonako!
It's okay, you're right. I was upset but I overcame it thanks to you guys listening to my rant :'3
imo, Chinese have lots of bizarre ceremonies and it's easy to forget since there are so many details involved @@ my fiance and I now are like, eh, just let the parents/elders manage it, we can't exactly fight them~

Overall, I can only hope covid ends soon :'D
Everything is made difficult these days because of it.

I'm glad to hear you enjoyed the Q&A session though! *happydance
I also don't know how snow smells like, but I imagine it should be similar to the ice cubes I kept in the upper refrigerator? x'D (I legit pushed my head into the cooling box and yes, I can somewhat smell the ice rofl)

Thanks again for dropping by and see you around!
xoxo,