Good morning, guys! Excuse me for posting late, I overslept @@

Last week was hard, hard as in I had to juggle between watching Game of Thrones and writing x'D hell, it was hard to stop watching at all and I'm still at Season 5!

Tyrion is still my fave character ever! He's so smart, good with words, and smooth, he should be playing jazz somewhere in town *cough*

But seriously, GoT helps me a lot with grammar and complicated conversations. It makes me more... eloquent? There's so many things I wish to tell in Chapter 4 and 5 in the antagonist's route and I hope I did them justice ><

Here are the things I did last week:

1. I polished Chapter 4 part 2 again and this time, I re-wrote two scenes and added 1.5k+ words to the word count.

2. I slowly make my way through chapter 5. There's this scene I polish again and again, and I'm still not quite satisfied with it >< I think I'll leave it for now and re-read it later to see what else I can improve.

For now, I've decided to just continue writing. It still feels like a rough draft, but I'll get there once I get the angst mood/inspiration I need!

For Guntur, I polished his abs. I thought they look a little strange so I make the shape firmer and shifted them a bit to the right. Better looking, right?

I also tweaked the face of his 2nd sprite (Defined his jawlines and chin a little).

But for Kahlil, it's tricky.

Which one do you think suits him? He's androgynous, but at the same time, I want him to look lean with a little bit of muscle, at least more than Arya, but with his pretty face, it's kinda difficult for me to get it right >< any suggestions?

Last but not least, here's a sketch for Lilynthra! She asked to see a sketch/fanart of my characters and I coincidentally make one of Guntur (when I was thinking about how to make his abs look better/firmer x'D)

Okay, phew, lots of pictures for today's update, eh?  This week, I'm planning to finish watching Game of Thrones and hopefully, I can write a good climax for the antagonist route!

That's it for now and see you guys next week! xoxo,

Support me on: Patreon or buy me a Ko-Fi~

Ahh! Pretty boys with abs, what a miracle!

Thanks for this delicious fanservice(mwah!) and your heart work!

Looking forward to the next update!

The progress is doing well thanks to you and many other people's support ^///^ I'll see you again next week!

Guntur looks gorgeous! I definitely approve of the changes!

As for Kahlil, I think you don't have to define the muscles as much as in the second version. But if you want him to still look a bit more lean, I'd suggest you to go for the base of the first version, but do the belly and hips region more like on the second one, maybe in that same zone, start outlining the abs but only the overall outline of all the abs, not each individual muscle. From where I stand, his belly looks okay in the second pic, but the more you go near the pecs, the more it's too much muscle? That's why I suggested that. Does it make sense? I'm not even sure XD

Pfft, yes, this update is full with fanservice x'DD
And yup! My friend also told me the same; combine A & B and make the V line a little firmer, so... 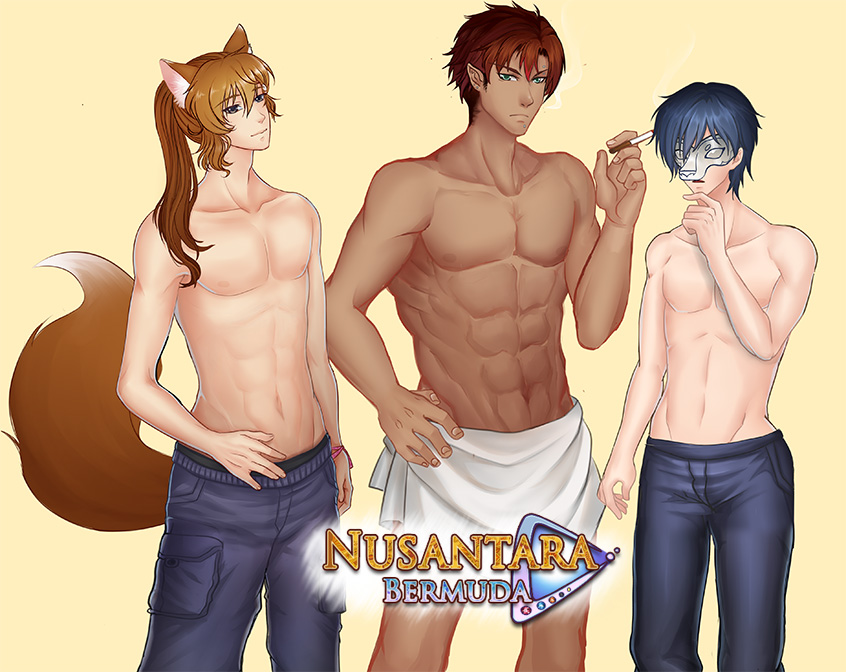 There!
Feast your eyes, peasants! //slapped

P.S. Kahlil & Arya is supposed to be in their boxers, but I'll leave it for another day's work x'D