How did your week go?

Mine was mostly spent with getting to know Ren'Py programming again ><

Chapter 2 revolves around Maya's arrival on the Forgotten Isles & the mysterious half-submerged houses. Part 1 was finished and was included in the demo while we've just started with part 2 ;)
209 pages are a lot? Well, wait until you see how many pages there are in Chapter 5 x'D

2. Because I haven't reached the part with new CGs, I focused on finishing secondary sprites for Kahlil, Arya, and Guntur's fighting pose. 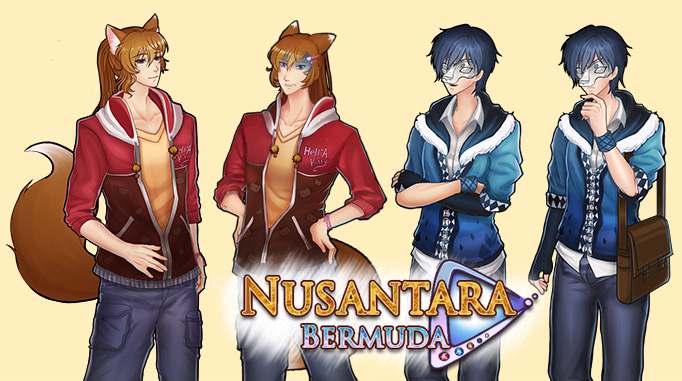 Arya's sprites are really easy to program. Both secondary poses comes with a variety of 'with a bag/no bag'.

I had some ups and downs reacquainting myself with Kahlil's sprite programming though x_x his flicking ears and moving tail are cute as hell, but the programming could be confusing as heck lol. However, thanks to him, I managed to adapt into programming quite fast. His ears and tails also makes him the most expressive of all four bachelors.

On the other hand, I haven't decided on Kahlil's fighting pose >< he's a character focusing on agility so... maybe I'll use a running pose instead? Arya's fighting pose is his wolf form so he's the first one finished lol.

Hmm? You want to see Guntu's fightinng pose? I'm sorry, but for now, Guntur's fighting pose will be exclusively kept for the eyes of my patrons on patreon! ^.^)/

3. More polishing! As usual, there are scenes to be adjusted and polished~

Welp! We've just started and I think 11 pages are a good start! >:) If I remember right, there's only 3 CGs in Chapter 2 part 2, so I'll make Kahlil's fighting/running pose when I have extra time.

That's it for now and see you guys again next week!
xoxo,

P.S. I'm going to try my hand at 3D koi painting in resin! Since every layer of resin needs around 8 hours to dry, I think it's something I can do to relax before I go to sleep.

How many chapters are there total in the finished game?

Hi, pockygirl19!
In the finished game, every route will have 5 chapters in total! ^.^ Some scenes are similar, but every bachelor will have different scenes starting from the middle of chapter 3 until chapter 5 + Epilogues!

Thanks for the response! I look forward to the game's completion. :)

You're welcome and see you around~

The recent two or three weeks were my most stressful moment this year 😂 Sorry I didn't comment anything on your previous updates, SweetChiel. But I did read them all ;;)) Now I'm on the way to go back home after a stressful college... I really want to do nothing in this holiday WKWK

Good job!! *pat on your shoulder* I don't know much about Ren'Py's programming. But I have looked at its codes. We have to be thorough, so it must make your eyes hurt lolll Don't forget to let your eyes rest.

Once again, g'job! I'm looking forward to your next update.

You can do it, PangHerHeart! Tackle college! Actually, thanks for sparing some time to read my updates! ><

Take a deep breath, get some naps, or maybe eat an ice cream. They always help me whenever I'm stressed :'3 and yeah, ren'py could be such a headache! You have no idea how much I struggled when I first try learning it :")) but now, it's like riding a bike--a big, tumbling bike, but I'll manage x'D my motto for programming is; "It's fine if the code looks untidy! If it works, it's good!"

I've checked the Patreon post, and Guntur looks really nice! But then again, he always does haha...

As for Kahlil, I think a frontal or almost frontal running pose would be nice, yeah. Or something like crouching / dodging with fllowing hair.

Glad you like it, Konoi!
As for Kahlil, yeah, I'm thinking almost frontal running pose--or a sideway running pose so it could look like he's running + dodging at the same time? Looks like we think alike! x'D